Some time you want to spin up a simple, static web hosting somewhere, just HTML, JavaScript the most. If you don’t bother to create a new WordPress site or set up a Windows Server with IIS etc in Azure. Now there is a solution.

Azure treats this as a serverless service, site content are hosted in Azure Storage account, and that is enough to get a new website running.  The service itself is free as preview now, but storage account itself still has a cost.

You may already knew, how to create a storage account: https://docs.microsoft.com/en-us/azure/storage/common/storage-quickstart-create-account?tabs=portal

Very handy tool, still in beta I guess: https://azure.microsoft.com/en-us/features/storage-explorer/, you can use it to directly access Azure storage contents.

You will have a URL like: https://storageaccountname.zone.web.core.windows.net/index.html, the HTML file will be in the $web container.

Of course, you will be able to use your own domain name for the site.

It’s not you, it’s Azure. Here is one explained “This is an unfortunate set of errors presented from the Azure side, but they are correct. Storage account names must be unique across all Azure accounts, not just your own, so someone else likely has the name.”

Well, this is just some notes on how to prepare PowerShell to manage Azure Active Directory and Office 365. But similar to connecting to AD in Azure, you also need to go through these steps to connect PowerShell to an Azure subscription.

This is quite interesting actually when I put them together. As AAD still has two active environment versions, same as Azure console – Classic and RM – they belong to different logins, a little confusing to admins. Also PowerShell modules need to be installed and updated to enable different cmdlets set in order to manage different products – cloud, non-cloud, 3rd-parties like AWS, etc. So when something is not working, maybe you are in a wrong dimension or Microsoft wants you to update the binary you are using.

One more thing: remember to check the update time of anything posted online, those older than 3 months might be useless.

Azure Cloud Service Role is classic, old style, one of those you won’t see updated counterpart in new Azure Resource Manager (ARM).  In Azure, a Cloud Service Role is a collection of managed, load-balanced, Platform-as-a-Service (PaaS) virtual machines that work together to perform common tasks. Cloud Service Roles are managed by Azure fabric controller and provide the ultimate combination of scalability, control, and customization.

Web Role and Worker Role are under Cloud services (classic). 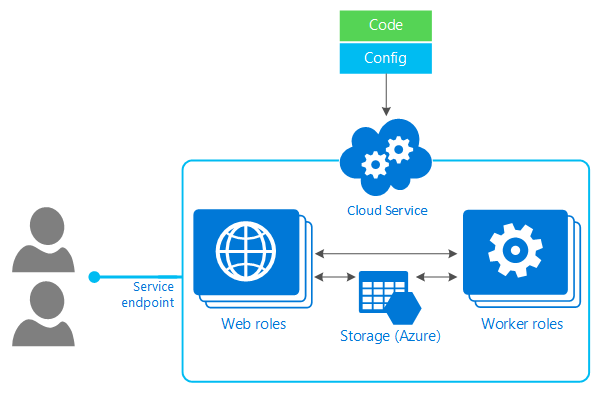 Web Role is a Cloud Service role in Azure that is configured and customized to run web applications developed on programming languages / technologies that are supported by Internet Information Services (IIS), such as ASP.NET, PHP, Windows Communication Foundation and Fast CGI.

Worker Role is any role in Azure that runs applications and services level tasks, which generally do not require IIS. In Worker Roles, IIS is not installed by default. They are mainly used to perform supporting background processes along with Web Roles and do tasks such as automatically compressing uploaded images, run scripts when something changes in database, get new messages from queue and process and more.

Differences between Web and Worker Roles – The main difference between the two is that a Web Role support and runs Internet Information Services (IIS), while an instance of a Worker Role does not.

The 7 section CBT course is just a plain voice reading through the scripts.  I would rather read more up-to-date web pages on microsoft.com.  Compare to other courses in the market, this one has no value, just a waste of time and money.